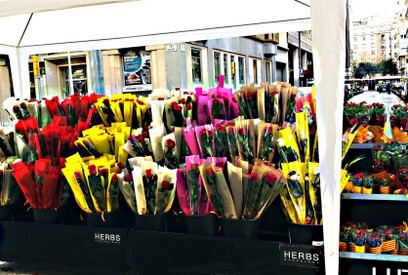 Red Roses of Sant Jordi to celebrate a Magic Day

Every  April 23 the Day of Sant Jordi is celebrated in Catalonia, a magical  day in which the streets and the homes fill with the perfume of the red  roses.

Do you know the origin of this wonderful celebration? He tells the legend that a terrible dragon frightened a town with eating his crop.

The pueblo and the dragon reached an agreement: in return for being able to  live peacefully, they would sacrifice once a year a young maid,  offering her so that she ate it.

One year the luck wanted the chosen maiden to be the daughter of the king. When the princess was about to be devoured, the knight of Sant Jordi  appeared, with his armor and his spear, and killed the dragon.

A splendid red rose bloomed in the blood of the monster that the knight gave to the princess.

That’s why lovers give up red roses every April 23 and celebrate their love. Sant Jordi is considered practically as the pattern of lovers in Catalonia, and it is a day as romantic as Valentine’s Day.

Tradition commands that the red rose, a symbol of love, is accompanied by a wheat sprig, which represents the fertility, both of the crops and of the  couples.

This date, which has been celebrated since the middle of the fifteenth  century, has spread so much that roses are given not only to couples but  also to friends and relatives.

Also  coinciding with the day (approximate) in which two of the most famous  writers of the universal history of literature died, Miguel de Cervantes  and William Shakespeare, also celebrate the day of the book.

Traditionally, women had the gift of the red rose of Sant Jordi with a book for men. Nowadays, both the purchase of flowers and books do not understand the sexes.

The streets of the main Catalan cities are filled with places where many book firms are organized by their authors.

Sant Jordi is like this a patriotic day full of flowers, culture and, above all, love.
What Rose of Sant Jordi is the best to give away? 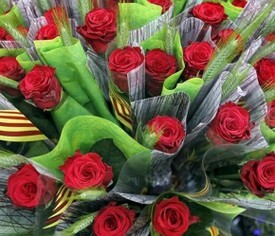 In  addition to the classic red rose along with its spike and its ribbon with the colors of señera, the Catalan flag, if you want a Day to be  special for some reason, you can opt for fuller branches, three, six, or even a dozen red roses.

In HERBS BARCELONA we have also prepared some more original bouquets that include gifts such as a box of chocolates or a bear.

The option for the most daring is to give a mini rosal and make the feelings of April 23 last through.

To send to those who are outside their land on such a special day we  have prepared a bouquet that symbolizes the Catalan flag, with six red  and six yellow roses.

Become the knight of the legend without having to kill a dragon. Offer a rose from Sant Jordi to your princess and you will receive a book in return.

In HERBS BARCELONA we help you in this mission. Our  roses are of the Freedom variety, one of the highest quality and most  sought after by Sant Jordi, mainly because of the beauty of its red petals, its long stem and its duration. We send roses from Sant Jordi to any city of Spain.

Celebrate one of the most beautiful traditions related to flowers and give red roses to Sant Jordi!